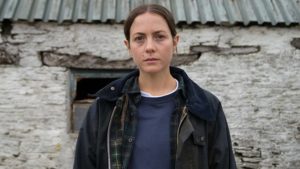 During the 2001 foot-and-mouth outbreak, Rhian and her brother Dewi struggle to keep the Welsh hill farm they inherited from their father running. As the disease reaches their doorstep, Rhian tries to control her increasingly unstable brother.

“This short film is inspired by my novella ‘White Ravens’ and is really worth catching. Lovely performances, photography and direction” – Owen.