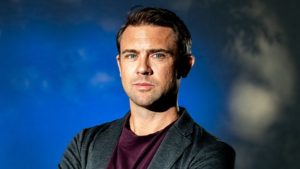 Owen Sheers talks about his novel I Saw A Man with James Naughtie and a group of readers at the Dylan Thomas Centre, Swansea.

After the sudden loss of his wife, Michael Turner moves from Wales to London to start again. Living on a quiet street in Hampstead, he develops a close bond with the Nelson family next door: Josh, Samantha and their two young daughters.

The friendship between Michael and the Nelsons at first seems to offer the prospect of healing, and then one Saturday afternoon in June 2008 Michael steps through the Nelsons’ back door, thinking their house is empty and everything changes.

Meanwhile thousands of miles away, just outside of Las Vegas, a man is setting in motion a change of events which eventually come to puncture life on that Hampstead Street.

And Michael finds himself bearing the burden of grief and a secret.