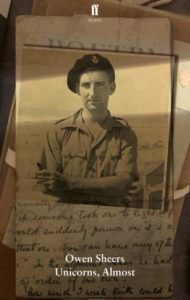 An adaptation for radio of a new stage play by the writer Owen Sheers. Unicorns, Almost portrays the short life of Second World War poet Keith Douglas, from his childhood through four engagements to his fighting in the Western Desert, his accelerated education as a poet and his early death three days after the Normandy D-Day landings at the age of 24. It is the story of his Faustian pact with a war that would nurture his unique poetic voice before abruptly snatching it away. It is also the story of his desperate race to see his poems in print before his time on earth ran out.

Widely recognised as the finest poet of World War II, Keith Douglas was championed by Ted Hughes as an important influence. Hughes wrote the introduction to Douglas’s The Complete Poems, published by Faber.

This programme will be available shortly after broadcast: www.bbc.co.uk/programmes/m000j2bn