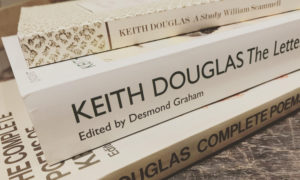 UNICORNS, ALMOST is a new one–man play about the life and work of World War II poet Keith Douglas. John Retallack will direct the premiere in Hay-on-Wye in May 2018.

Written by Owen Sheers, UNICORNS, ALMOST conjures Douglas back into confrontational existence before an audience. Echoing the frequent direct address of his poems, Douglas’s pressure to speak to us is twofold: a desire to remind us of the horrors of war and what it steals from us, and a frustration that despite having seen his poems into print they have remained, for the last 70 years, largely unread.

UNICORNS, ALMOST opens in Hay on 25 May and will run until 7 June at The Swan Hotel, Church Street, Hay-on-Wye, HR3 5DQ at 5pm and 8pm.