On 15 June 2015, The Jurors was revealed for the first time as part of an international gathering of thousands of invited guests to mark the 800thanniversary of the sealing of the Magna Carta at Runnymede. To mark this occasion, Owen Sheers, poet, author and playwright was invited to write a dedication for the artwork, to be performed at the event.

A film (below) was screened on site, depicting the performers emerging from the surrounding landscape of woodland, roadways and riverbanks.

‘Or In Any Other Way’ directly references the content of The Jurors and follows the form of Oscar Wilde’s Ballad of Reading Gaol. On 15 June, each of the performers recite a stanza while approaching The Jurors. As they assembled at the artwork, the final stanza was recited by the group in unison before they took their seats, eventually joined by heir to the throne, HRH Prince William. 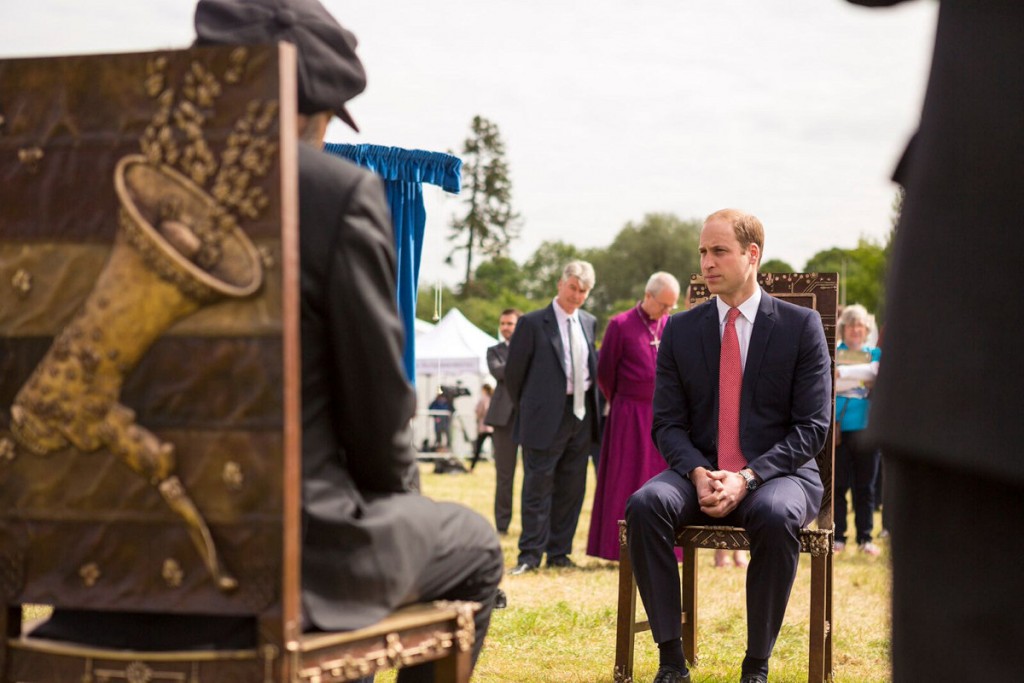 The sound of footsteps approaching from many directions.
The sound of a boat cutting against a river, wheels on a rough road.
Each speaker recites their verse while approaching the artwork.
All continue advancing after they have spoken, forming a tightening ring around the artwork.
A young black woman emerges from the trees.

In every human beating breast
the love of freedom lives,
impatient of oppression’s print
it pants deliverance –
which only words that break cement
have the power to give. 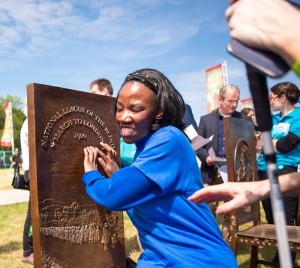 But words are weak as well as strong,
they die upon the air,
and commerce can enslave the heart
that once was feathered fair.
For in the middle passage
who will hear, who will care?

An Asian woman appears along a path.

But words are strong as well as weak,
like carvings on a tree,
they sing to those who mark them down
and those still yet to be.
For humanness is in the ‘look’
as much as in the ‘see’.

A man in a wheelchair approaches down a road.

And like the piano tuner
who stalks his temperament,
so we can seek our equal notes,
our words to represent.
For knowledge is like water held
without the words to vent.

A Burmese woman comes into view.

And whatever heaven you hold
within your body, your head,
its sight is through the people’s eyes
despite oppression’s lead.
The only prison is that of fear,
the fear of what is said.

A man appears from thick woodland.

Yet each man kills the thing he loves –
The stricken ship spills its oil
upon the sea that made it whole,
so we will tear and spoil
the best of us that makes us man
the best that makes us royal.

A refugee emerges from a boat moored on the river bank.

Even now we become unmoored,
cast off our best creation
like throwing children overboard.
But the rule’s venation
is hardy – grained within our wood
in spite of what we’ve done.

And not just for men but women, too,
however veiled their dress.
For what is a law that only
applies to half of us?
A scar, that’s what, upon itself,
a gain become a loss.

A South African man approaches.
He holds a partly shredded document.
A black man walks along a fence.

But words are strong as well as weak,
and in their death, revive.
Their light shines through the censor’s ink,
when torn they still survive.
For freedom looks towards the sun
so in the darkness, thrives.

A young man emerges from the American Bar Association monument.

So laws are words, and words are us
and speech has set us free.
But what when laws become our chains
in name of liberty?
When mouths are watched, and tongues are cut,
how then does Justice see?

Another young man appears from the woods.

A dancing leader needs the led,
their heart as well as hand,
and in this way justice can live,
and we can make our ground –
with words and witness, ‘til
all we sought, can now be found.

A young woman walks down a path.

And should a bullet pierce the brain
its thoughts will still live on,
and all the more if those ideas
are grown from ‘Us’, hand-spun.
So this is how our justice flows,
and this is how it’s won.

All the speakers converge upon the artwork.
As they reach the bronze chairs, they recite the final lines together.

So this is how our justice flows,
and this is how its won.
With strength of mind and strength of word,
and in a thousand tongues.
A tale of ‘Us’ and not of ‘You’
across the nations sung.

All the speakers, in unison, sit on the chairs.
Silence.

More about the artwork: www.artatrunnymede.com