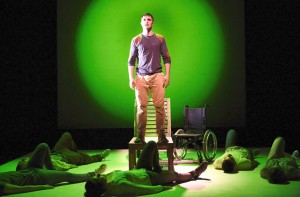 ★★★★★ “Pink Mist may be the most important play of the year. It is certainly one of the best.” What’s On Stage

★★★★★ “A remarkable experience…This ground-breaking piece of theatre is not one to be missed.” The Fix Magazine

★★★★★ “explodes onto the Bristol Old Vic stage with a young cast on top of its game. This is a tour-de-force” StageTalk Magazine

★★★★ “an emotion-wrenching piece” The Independent

★★★★ “fearlessly lyrical in its imagery” The Times

Pink mist is the spray of blood that hangs in the air when a soldier is blown up. It is the moment when vitality turns to vapour. Owen Sheers’s drama, lightly rhymed and richly phrased, captures that moment and its consequences. Indelibly.” The Observer

What unfolds before the audience in Pink Mist isn’t just dance; it isn’t just theatre; it isn’t just performance poetry. It’s all of these things and more, far more than the sum of its parts.
It’s a truly extraordinary experience.” British Theatre Guide

What I can only describe as theatre history… Extraordinary.” BBC Radio Bristol

From the three standing ovations on press night it’s clear we won’t be able to keep this to ourselves for long. Go now, before the rest of the country clamour for it.” Bristol 24/7

This is a tour-de-force worth catching, and surely the antidote of antidotes to all war games-style army adverts. This at last is an anti-war commentary that recognises that physical and mental injuries are not solely experienced by those paid to step into danger, but by all those close to them. There is a ripple effect to heartache and Pink Mist doesn’t flinch from it.” StageTalk Magazine

Beautifully performed by its young cast, John Retallack and George Mann’s production finds a physical language – a mix of Frantic Assembly and Gecko style movement– to match the brawny verve of Sheers’ poetry, and the interplay between those two elements and Jon Nicholls’ delicate sound design is particularly effective. There are times when the density of the experience makes it hard to endure, but like Sheers’ verse it develops its own rhythm and the physical comes to rest in a still, haunted silence. Heartbreaking.” The Guardian

The cast and crew do a stunning job – with real sensitivity to the voices, terms and places of Bristol. It’s a treat to see the six actors summon up everything from Afghanistan war scenes to a club night at the Thekla with nothing but body language and evocative sound and lighting. And it’s fun in many places too.” The Bristol Post

The combination of exceptional performances by the entire cast, the choreography, lighting and sound has created a remarkable experience that stays with its audience far after the numerous standing ovations subside. This ground-breaking piece of theatre is not one to be missed, and will certainly be enjoyed by many audiences in the years to come.” The Fix Magazine